Crunchy Ice and The North Country

One of my very favorite things about an early spring after a very snowy winter is the crunchy ice that forms in very thin, glassy sheets at the melting edge of the snow. I can’t resist stepping on it. I will go out of my way to step on it. As a kid, I sometimes took an hour to walk home from school because I was stepping on all the crunchy ice.

For some reason, this activity makes me think of a radio program that used to be on Wisconsin Public Radio Sunday nights called “Pages From A North Country Notebook” with George Vukelich. The stories themselves didn’t really stick with me so much as his voice as he read his essays about life in Northern Wisconsin, one of my very favorite places on earth. I have never really heard anything quite like it since. The juxtaposition of stories about the philosophical musings of a bar regular named Steady Eddie, an art house rendering and ethereal music was genius to me. I’ve been looking for an audiotape of the show, but I guess it’s “out of print” from WPR. The theme song, “Wisconsin” is a available on two different Glen Yarborough recordings, I understand.

And this then brings me to the loops of thought that circle round and round in my head for decades. Maybe this is why I can never find my keys? 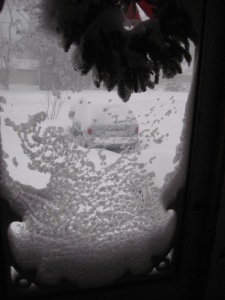 View through the storm door after the Big Blizzard of 2011 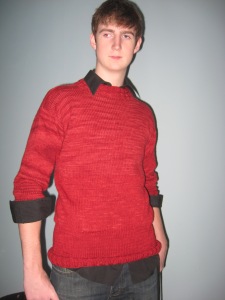 This is not a Ten Year Sweater because it took 10 years to make. No. It is a Ten Year Sweater because that’s how long Justin will be able to wear it before it no longer can be made to fit. I made it for him in 6th grade from a great red wool I got on closeout from an Oak Park yarn shop which has since closed. It was a bit loose for him, and he didn’t like the scratchiness against his neck, so I added a soft black hand spun alpaca lining to the crew neck. By then, he was no longer interested in the sweater and didn’t wear it more than once or twice. In 8th grade he was interested in it again, but it was too short, although the shoulders and arms fit better. I had a couple extra skeins, so I lengthened the bottom. You can kind of see the addition in the photo. He tried it on, and discovered that it was……too long! Fast forward to sophomore year, Sweater Day at school. Here he is, wearing it in his cool fashion. The length is great, the shoulders are still great, and the sleeves are now too short, but he wears them rolled up. I can lengthen them, since I have more of this yarn.

I did not use a pattern to make this, but just did a basic drop-shoulder crew neck with back shaping so the hem would hang evenly. I hope he will wear it more than once a year, since this color is so awesome on him. Or rather, he makes the sweater look awesome! The color variations are natural, and are not as pronounced in person as it appears in this photo. With any luck, this could be a 30 year sweater! 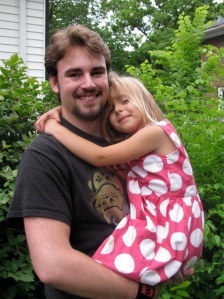 Willem and Charlotte at the Graduation Party, 2010

This should have been posted in August, but I took my time learning how to post photos in the post text.

Continuing with the Egg and Chicken Theme 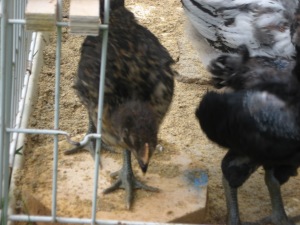 Well, four of the Wayandottes are roosters. We have only three hens. So choices will soon have to be made as to whether the roosters will be able to be gifted to others as pets (rooster, anyone?) or whether they will be residing in the freezer eventually. We will be keeping the Java rooster, as he is so incredibly handsome and we imagine ourselves breeding Java Red’s. We will be keeping the stunningly beautiful Java hen and the two strikingly handsome Wayandotte hens as well.

The coop update – rather than enclose the “big toys” as I had always dreamed, My Man built a plywood palace for them. They are near the house, and the other day, I could hear the 5 roosters trying out their crowing skills. They sounded like teenage boys, with the voice cracks and all!

I wonder, why am I so taken with these birds? You may be wondering the same thing. I can believe it has much to do with my own chicks being so darn old and so eager to jump out of my nest….. the nest they used to fear leaving only a few short years ago. Now, it’s no good anymore, they must fly to better, more worthy pastures. And I’ve learned, there’s a lot to be said for having a dog at such a time in a mother’s life!

Last winter, we used a lot of eggs.  We ate eggs for breakfast, I made banana bread every few days and zucchini bread in between banana breads, I made gibanica often. I kept hard boiled eggs on hand for kids running out the door for the bus. I was always running out of eggs. So when I joined meat and veggie CSA’s this spring, I signed up for the monthly eggs at two dozen from the meat farm and weekly eggs at two dozen from the veggie farm.  Well, hot weather temporarily cured my desire to bake, so the eggs began accumulating until I had about 9 or 10 dozen in the fridge. I kept meaning to contact both farms and reduce my order, but my days are busy y’all. So, on Thursday, I picked up my egg and veggie share and went immediately to friend Marina’s house to give her one box, and then gave Kim a box for feeding Justin so often. What a great feeling, knowing both needed eggs and had run out, and knowing I wouldn’t have to slide them in my fridge somehow!

That feeling buoyed me for several hours. Then, Willem came home from his friend’s house bearing……two dozen eggs from their chickens!

I don’t know if it’s because the Columbia Wyandottes were free, or because I had talked about it long enough but I left the Heirloom Livestock show at Garfield Farm with 8 chicks, the six Wyandottes and two Auburn Java’s.I understand that this may seem impulsive, but I have really been thinking this over for years, and there are witnesses to that effect. 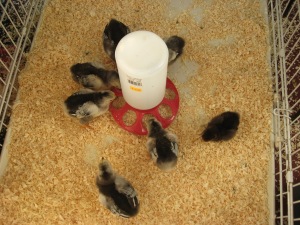 These chicks are some of those hatched by kindergartners statewide and shipped to the Museum of Science and Industry for their chicken exhibit. The guy from the museum had literally hundreds of chicks stacked in boxes looking for new homes.

They’re too young to tell if they’re roosters or hens yet, but the Museum guy noticed that some of the Wyandottes had a bump on the beak and some did not, so he speculated that the bump-beaks were roosters. We picked out no-bumpers hoping for more hens than roosters, but we’ll see. The Auburn’s were among the most beautiful chickens we saw at the show, and I can hardly wait for them to feather out. Internet search reveals that the roosters of this breed are non-aggressive, and they are truly gorgeous. The hens are equally stunning. The Columbia Wyandottes of both sexes look alike, and are striking black and white birds.

As luck would have it, at the end of Garfield Road is Johnson’s Feed and Country Store, which is now my new favorite store. Very atmospheric place. For $15 I got two waterers and a feeder and 10 pounds of chick starter feed. I forgot to ask how old these chicks are, but they’re supposed to be on this chick feed for three months. The Museum guy told me that within 4 months I will know if chicken raising is for me, or if these birds are now oven-ready. My town allows chicken raising for 4 months out of the year as long as it’s for an educational purpose, which it is for me, so I think that counts.

So tomorrow, I go to Home Depot for hardware cloth to enclose the wooden “big toys” out back for their habitat. Right now, they’re in Rosie’s old kennel in the front porch, which really gets too hot in the afternoon for safety.

My sister had joked on Facebook that I could probably hide a cow in my yard, and I actually saw a miniature Hereford cow at the farm who could be quite comfortable in my yard. There were adorable Red Wattle piglets there, too, but pigs didn’t seem the right fit – for now. A book on heirloom pigs revealed that there are Hereford pigs, too, and it got me to thinking about color coordinating a little farmette, like Frank Lloyd Wright did at his farm in Wisconsin with his red cattle to match his house. How ridiculous, right? But it’s amusing to think about.

Down with the old garage, up with the new.  The kids had fun painting themselves and friends and cousins on the old garage. Shortly before Helen’s tree damaged it, I had a moment when I thought I understood how my neighbors must feel about that garage.  How patient they’ve been with our quirkiness!  We were always going to paint the garage eventually.  I even found 5 gallons of brick red exterior latex on freecycle.  The boys were planning their summer around it.  Then, the lightning storm that struck and weakened Helen’s massive three trunked Ash.  Then, the wind storm that knocked the center trunk off and set Old Garage askew.

Were it not for the 100 year old oak wood of Old Garage, the tree would have smashed through it.  As it was, it shoved it out of square.  No contractor would true it up;  instead, it had to be torn down.  An ignominious end for an oak. 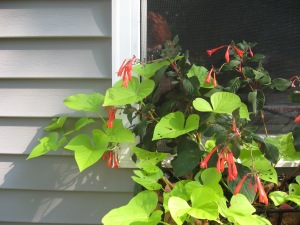 The soft blue-grey of New Garage is a fine counterpoint to windowbox flowers.

My new garage is a happy item for me.  It has a floor!  It smells fresh and clean!  It has no mice!  The simplest of pleasures. And best of all, the car stays drier inside the garage than it does outside! New Garage makes our house look shabby.  I felt a surge of ……something……… after New Garage was finished.  I wanted to rip off the siding on the house, put in new windows, build a new porch front and back.  Then I remembered about the money part.  Oh, well.

I will be taking down the rest of that ash tree, though.

Posted in My House | Leave a comment
A Windy Day
Create a free website or blog at WordPress.com.